Episode 211 – Dr. Vic Stenger on God and the Folly of Faith

Today’s show was mostly about faith.  After reading and discussing a few stories involving the rising number of atheists in this country, as well as harm being down by religious fanatics, we discuss religion and faith having played a role in our own lives and how and why we decided to shed them. 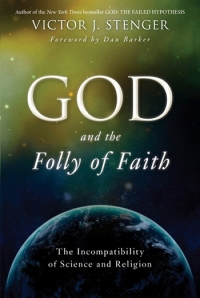 In our second hour, we spoke to Dr. Vic Stenger about his latest book, “God and the Folly of Faith” and why exactly religion and science are incompatible.  We touched on how combining an academic background in both philosophy and science gives Stenger a stronger perspective on these matters, and why he disagrees with the late Stephen Jay Gould’s assessment that science and religion are “non-overlapping magisteria.”  Stenger rebuts the idea that, where god is concerned, “absence of evidence is not evidence of absence,” and lays waste to the notion that faith is somehow a virtue.  An enjoyable discussion that hits faith where it hurts.

Friend, family member, possible werewolf. I co-host Strange Frequencies Radio, blog at Confidential Korbus, and generally walk among the weird. When I'm not doing busywork, I can usually be found with my nose in a book, my eyes glued to a glowing screen, or my ears tuned to The Ramones.
View all posts by Jason Korbus →
This entry was posted in Downloads and tagged faith, god, god and the folly of faith, philosophy, podcast, religion, SCIENCE, skeptic, strange frequencies radio, Vic Stenger. Bookmark the permalink.