–The source of the NSA leak, Edward Snowden, has come forward.  Should he be hailed as a hero, or does he deserve vilification?
–Former “Ghost Hunter” star Brian Harnois is being accused of scamming fans out of money. 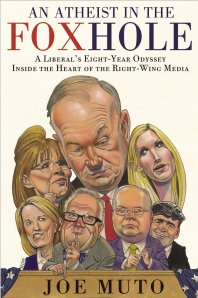 –We update last week’s “Psychic Challenge” that found Facebook psychics getting detail after detail wrong.  Spoiler alert:  they’re doing worse this week.
–So-called psychic who reported a mass grave of dismembered bodies would be found on couple’s property ordered to pay millions in defamation lawsuit judgment.
–Another “psychic,” Derek Acorah cancels show due to “unforeseen circumstances.”  No, seriously!
—Texas man acquitted in the murder of an escort after she didn’t have sex with him.

In the 2nd hour, the former “Fox Mole,” Joe Muto, joins us to talk about his 8 years as a godless liberal working at Fox News as detailed in his new book, “An Atheist in the FOXhole.”

Friend, family member, possible werewolf. I co-host Strange Frequencies Radio, blog at Confidential Korbus, and generally walk among the weird. When I'm not doing busywork, I can usually be found with my nose in a book, my eyes glued to a glowing screen, or my ears tuned to The Ramones.
View all posts by Jason Korbus →
This entry was posted in Downloads and tagged an atheist in the foxhole, brian harnois, derek acorah, edward snowden, ezekiel gilbert, fox mole, fox news, ghost hunters, interview, joe muto, murdered escort, nsa, psychic challenge, psychic fail, scam, texas gun laws. Bookmark the permalink.