–As the government shutdown ends, a House stenographer grabs a microphone and begins to holler about the mockery of god. 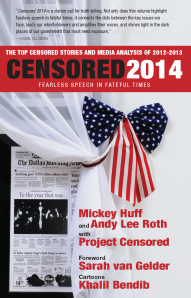 —Otzi the Iceman may have 19 relatives in an Austrian area.  Would you want to know if you were related to him?  How about other historical figures?
–New DNA evidence may have solved the Yeti mystery – an ancient polar bear
—OJ Simpson planning to be a televangelist when he is eventually released from prison
–The Walking Dead season 4 premier gets a huge rating.  We review the most recent episode, and preview the upcoming one Sunday night.
–We open the SFR mailbag to engage honestly and fairly with some of our criticism.
POST-INTERVIEW: A review of the Carrie remake, and we discuss some of our weird health related eccentricities.

In the 2nd hour, we spoke with sociologist Andy Lee Roth, associate director of Project Censored, about the most under-reported stories of 2013, as well as how corporate media outlets narrow the scope of public debate.

Friend, family member, possible werewolf. I co-host Strange Frequencies Radio, blog at Confidential Korbus, and generally walk among the weird. When I'm not doing busywork, I can usually be found with my nose in a book, my eyes glued to a glowing screen, or my ears tuned to The Ramones.
View all posts by Jason Korbus →
This entry was posted in Downloads and tagged andy lee roth, censored 2014, corporate media, government shutdown ends, interview, mocking god, oetzi, oj simpson, otzi the iceman, project censored, stenographer, televangelist, the walking dead review, yeti dna. Bookmark the permalink.