–After some confusion over who would talk first, Bobby finally gets to talk about celebrating Christmas in July here on Strange Frequencies Radio.
–Bobby says that a Pennsylvania board has designated Bill Cosby as a violent sexual predator and, as such, he can’t admit to liking the Cosby Show anymore. Jason says when you spend decades drugging and raping women, that’s kind of how it goes. They speculate over Cosby’s upcoming sentencing.
–Seemingly everyone’s house has at least one “junk drawer,” or “junk cabinet.” Bobby has a whole junk room.
–The boys are planning a Halloween party, and intend to attend as Laurel and Hardy. Jason has the fat part down, but admits he would have to buy a new wardrobe. 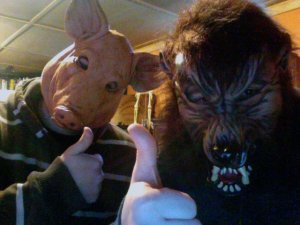 –Zak Bagans has purchased a portrait of Charles Manson made from the artist’s blood and Manson’s ashes. Jason and Bobby remark how, though they dislike Bagans, they think his collection of weird items is pretty incredible.
–Bobby is reminded of when Jason was posting serial killer cards on Valentine’s Day. This leads Jason to do a quick Google search and share a few funny ones.
–Jenny McCarthy is fooled by her own Google Home device into thinking she was living in a haunted house. Bobby talks about some weird things his Alexa device has done.
–How old does a car have to be until it’s considered a “classic”? And, more importantly, when does music become “the oldies,” because Jason is sick of hearing songs he grew up with on the oldies station.
–The future is looking more and more automated, whether that is self-driving cars or talking to your house, things are getting weird.
–Bobby brings up the concept of infant genetic engineering, where you can “create the baby of your dreams,” choosing gender, hair color, eye color, etc. Jason wonders if the same could be done with personality. Either way, he feels like discovery would be the greater joy, and wouldn’t want to participate in that. Bobby seems to feel the same. Besides, his son already likes Star Wars stuff, so he’s all set.
–We wrap up the show with a bit of Trump talk, covering the recent ground of the Trump – Cohen audio, to talking about Trump’s disastrous Helsinki summit with Putin from last week. Bobby is openly scared about what will come next.