–Jason has a text document with several stories lined up for SFR, but hands the show over to Bobby because there is ONE STORY he wanted to spend the broadcast on. But first…
–SFR’s recording almost had to be delayed this week, as Bobby’s oldest daughter spent some time in the hospital recently.
–We briefly bring up the story of the Dubai flight quarantined at JFK with multiple ill passengers. Jason breaks the news to a very surprised Bobby that none other than Vanilla Ice was onboard!
–The ONE STORY that Bobby wanted to talk about? Trump-related, of course. He starts with the upcoming book from Bob Woodward, and asks Jason if he thinks its release is being timed to do maximum damage to the president. 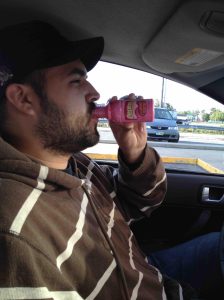 –From here, Bobby moves on to the anonymous Op-Ed published by the New York TImes from a “senior official” who is, along with others, working to undermine Trump’s worst instincts to save the country.
–We speculate as to who the insider is, with the first name Bobby mentions being Kellyanne Conway. Jason mentioned that the NYT seemed to indicate it was a male, by tweeting the pronoun “he,” but Bobby thinks it may be a ruse.
–One fun “theory” floating around on the internet is that the author is none other than vice president Mike Pence. It all centers around the use of the word “lodestar” and the VPs use of it in prior speeches.
–Jason is concerned that this effort will backfire. Knowing there to be a “mole,” Trump and his most ardent supporters in the administration may now distrust, and even work to remove, any dissenting voices. That’s a bad thing for the country.
–Bobby mentions the potential of invoking the 25th Amendment to remove Trump, but Jason says those who consider it a viable option have not read the amendment carefully. At this moment, it would be more difficult than impeachment, and that’s already a tall order prior to the upcoming midterm elections.
–Finally, Bobby wants to hear thoughts on who the Democrats will run against Trump in 2020. Jason says the two strongest names that come to mind are Biden and Bernie, but the next year is likely to bring about other possibilities. Bobby wonders if Booker will be in the mix, but as of now he’s still “ridin’ with Biden.”

Friend, family member, possible werewolf. I co-host Strange Frequencies Radio, blog at Confidential Korbus, and generally walk among the weird. When I'm not doing busywork, I can usually be found with my nose in a book, my eyes glued to a glowing screen, or my ears tuned to The Ramones.
View all posts by Jason Korbus →
This entry was posted in Downloads and tagged 25th amendment, bob woodward trump book, jesus take the wheel, lodestar, mike pence, nyt anonymous op ed, plane quarantine, strange frequencies radio, vanilla ice. Bookmark the permalink.